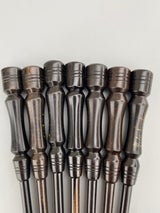 Comments: To be considered the original ebony, African Blackwood was imported and used in Ancient Egypt thousands of years ago. Even the name “ebony” has an Egyptian derivation as “hbny”—which has been shown to refer to primarily to Dalbergia melanoxylon, rather than the species which are considered to be ebony today: such as those in the Diospyros genus. In addition, African blackwood is technically in the Rosewood genus (Dalbergia), and is more stable and resistant to movement and warping than other types of ebony.